Glaucoma is a condition in which the optic nerve is damaged. The optic nerve is the part of the eye that carries the images we see to the brain. Damage to the nerve is usually associated with elevated pressure inside the eye (called intraocular pressure). More than 2.2 million Americans age 40 and older have glaucoma. Many others may be unaware they have this potentially blinding disease because they have no symptoms.

Glaucoma is not one disease; it comes in many different forms. The exact cause of primary open-angle glaucoma, they most common form of the disease, is uncertain. Some of the other forms of glaucoma may occur along with other abnormalities of the eye.

What are the symptoms of glaucoma?

There are usually no symptoms at first, but as the disease advances, a person with glaucoma may notice their vision gradually declining with:

The photos below show the effects of glaucoma on vision as the disease progresses. 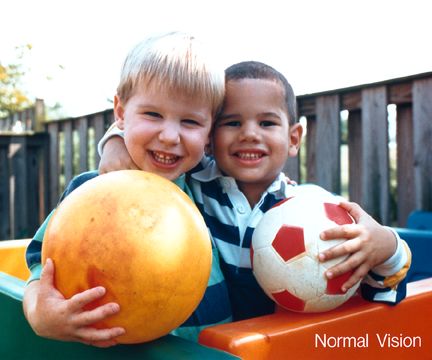 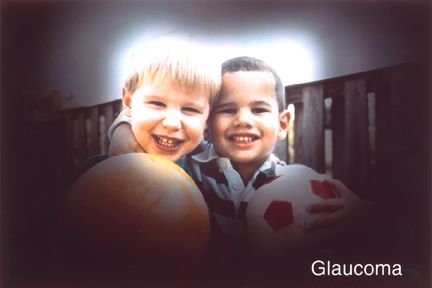 Anyone can develop glaucoma. Some individuals such as those listed below are at higher risk and should have an eye exam every one to two years.

Is there a cure for glaucoma?

Although there is no cure for glaucoma at this time, early detection and treatment can usually prevent loss of vision. An ophthalmologist can help control glaucoma by lowering intraocular pressure with eye drops, laser treatments or surgery. Vision loss due to glaucoma cannot be restored and if it is not treated can lead to blindness.

What is the difference between open and closed angle glaucoma?

Primary open angle glaucoma, (OAG) the most common form of glaucoma, is caused by a gradual blockage of aqueous outflow from the eye despite an apparently open pathway for the fluid to escape. Drainage canals for the fluid eventually become clogged causing a gradual and damaging rise in pressure. Unfortunately, OAG has no symptoms, can develop over a number of years and can cause gradual, permanent vision loss. With early diagnosis and treatment, OAG typically responds well.

Closed angle glaucoma (CAG) can develop quickly or over time. If it develops quickly, it can become a medical emergency and is referred to as acute narrow angle glaucoma. Such an emergency requires immediate attention in order to preserve sight in the eye. Gradual onset CAG is caused when the angle between the cornea and iris becomes too narrow or closed and thus the aqueous pressures build high enough to damage the optic nerve before the fluid can escape. CAG is more common in far-sighted eyes due to the physical structure of the eye. Angle-closure glaucoma may lead to symptoms such as nausea, headache, pain, blurry vision, and rainbow-like colors around lights at night.

The material contained on this site is for informational purposes only and is not intended to be a substitute for professional medical advice, diagnosis, or treatment. Always seek the advice of your physician or other qualified health care provider.